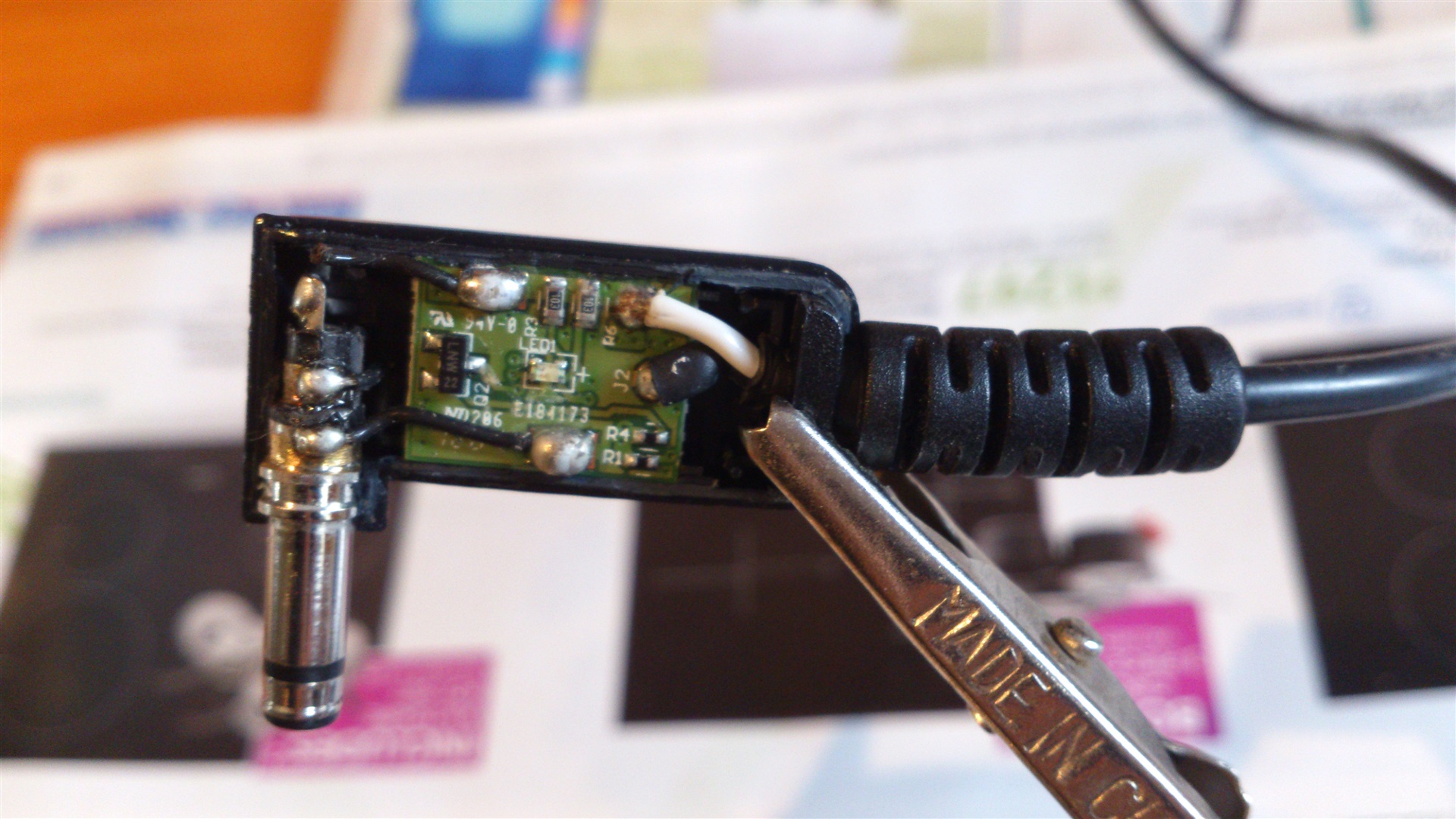 Inside the ASUS Taichi Power Plug

This is my recollection of repair I did for my laptop's power supply unit some time ago - I took photos at the time, so thought I may as well post them for the benefit of any other ASUS Taichi owner with a similar problem.

The ASUS Taichi is one of those interesting ultra-books that came out soon after the release of Windows 8. It has the unique feature of a dual-screen lid (one inside, one outside) so it can be used as a laptop or closed for use as a touch screen tablet with optional pen.

The form factor was not the only unique feature. Other unusual design choices were to move the charging indicator from the laptop to the power plug, and to have a three pin plug linking the AC power adaptor to the laptop. I wasn't sure what the third pin was for and it didn't matter, until the adaptor started to become more reluctant to charge the machine. It needed to be leaned on in particular way to convey any power, and eventually stopped entirely.

I wasn't initially keen to fiddle, as I didn't want to risk damaging the charging circuit on my Taichi's motherboard through a botched repair on the power adaptor. But after a futile search for a genuinely equivalent replacement, it was time to take the plunge and open up the plug.

The plug has a hollow moulded shell that was cut through with a hobby knife around the seam, revealing the arrangement below:

As you can see, there isn't anything strange going on in the AC/DC transformer in the adaptor's main unit - just two wires come out of that. All of the oddness it constrained to a circuit board sitting inside the plug to drive the charge indicator LED, which is the usual orange/green combination.

After some investigation I discovered that pin 0 and pin 2 were respectively plain old positive and negative connections that were continuously powered by the power supply. It isn't obvious from the photo, but the problem was simply that the wire linking pin 0 to the circuit board had broken - it wasn't flexible enough and had been soldered at a strange angle. The situation was addressed with a replacement (more flexible) wire and some soldering. On testing the fix, I got to find out what the mystery third pin was doing. It is simply a logic level indicator that would normally be supplying an LED on the front of any other laptop. All ASUS did was move the charge indicator LED outside the laptop physically, but the intelligence to drive it was left on the motherboard as usual.

The charge indicator pin (1) runs at +18.8V like the positive pin (0) when the machine is below 95% charge (orange), and drops to +13.8V when charging is almost done (green). The indicator is not lit when the plug is not plugged in to anything.

I didn't get to see the underside of the board so I'm not sure exactly how the circuit is designed - someone with more experience in such things could probably work it out on the limited information above.

In the end, the repair worked and the official power supply hasn't missed a beat since.

I also tried a similar looking no-name power supply from eBay purporting to be compatible with the Taichi. While it did technically work and looked similar, it had only a two pin interface - the single colour LED on their model was continuously lit. Weird things happened to the touch panel while that supply was plugged in, so I think its output voltage wasn't terribly well controlled - perhaps it was sawtoothing. If you wonder why I even tried it, it is because even ASUS don't sell three-pin power supplies in Australia. In the USA it seems there is no problem obtaining a compatible OEM replacement, but I just couldn't find anything with an Aus/NZ plug.